“Robert Hart (1835-1911) was one of those proconsuls of the Victorian age who built the empire – except that he did it in China, where he built an arm of government, the Chinese Imperial Maritime Customs Service. That a young Irishman from Belfast should become a chief fiscal administrator of the Chinese Empire fascinated the foreign community in China and has intrigued historians ever since.” [i]

Following on from last week’s blog  post from Emma Reisz comes another post about a public history project centred on the extensive Hart manuscript collection held in Special Collections at Queen’s University Belfast. Of significant importance in the collection is the series of personal diaries  (MS 15/1/ 1-77) which Robert Hart kept during his time in China. Running to 77 volumes and comprising a total of over 16,000 pages, Hart’s diaries are handwritten in hard- and soft-covered Victorian school notebooks of various sizes.  The diaries start in 1854 (when Hart was 19 years of age) and continue to 1908, thus covering the entire span of Hart’s career in China. There are, however, gaps during the run of diaries from the 1850s and 1860s, and on occasion, pages have been removed. Hart’s diaries, with the rest of his extant private papers, were deposited at Queen’s University (Hart’s alma mater) in 1971, as a result of a bequest of Hart’s great-grandson, the last Sir Robert Hart (d. 1970). 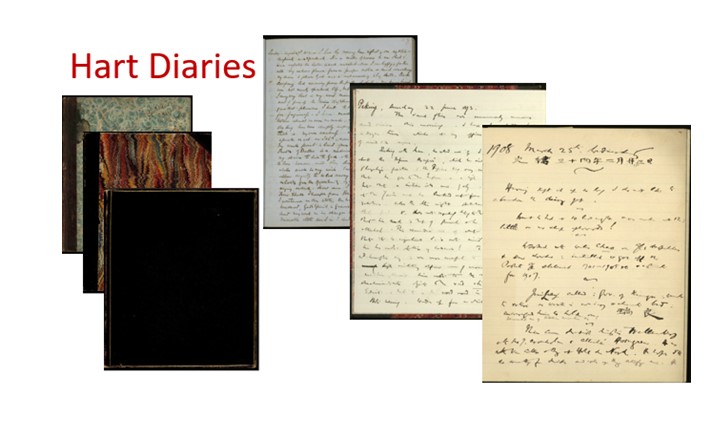 Survival and Significance of the Diaries

The survival of the Hart diaries is, as is so often the case with historical documents, largely a matter of luck. The bulk of Hart’s papers, private and official, were lost during the Boxer uprising, when Hart’s office and home were both destroyed by fire.  However, the 77 volumes of the diaries, were spared destruction thanks to the actions of Customs assistant Leslie Sandercock, “a 4th Assistant (B) of the Customs who carried [them] from the house in a black tin chest”[ii]. As by far the most substantial of the extant Hart materials dating from before 1900, the diaries are, therefore, a unique and highly significant resource for the study of the final decades of the Qing dynasty, and for contemporary Sino-Western relations more generally. In his preliminary assessment of the importance of the (then newly resurfaced) diaries in 1974, Edward LeFevour, having read approximately one third of the extant volumes, summarised what he saw as their importance:

In short, a thorough new history of the overall impact of the Customs can now be written. The Hart diary takes us beyond the limits imposed by previously available sources because it has unique information on important subjects. In the diary Hart describes the work habits of the high officials assigned to the Tsungli Yamen; he describes their responses and his responses to suggested economic and technical changes; he gives details of the interaction between Western merchants, Western diplomats and Chinese officials. Several hundred entries enlarge our understanding of China’s internal condition and its struggle to adjust to Western power in East Asia.[iii]

Preservation and Digitization of the Hart diaries

Having survived the Boxer uprising and later passed into the custodianship of the Hart family, the diaries have, since 1971, been in the care of Special Collections at QUB. They are, with the rest of our holdings, currently housed in our closed-access and environmentally-controlled store.

Researchers wishing to consult the diaries do so by appointment in the Special Collections Reading Room, which is also environmentally controlled, and Special Collections staff are always on hand to advise on the best practices for handling these unique and irreplaceable materials. Whilst the diaries are in remarkably good physical condition, there is no escaping the fact that the oldest of them is now 163 years old and that paper is a vulnerable medium.

As such, the decision was taken to undertake a project to digitize and transcribe all 77 volumes of the diaries, with the long term aim of creating a more robust digital surrogate of the originals which could more easily be made accessible to researchers.  The initial digitization was undertaken by Riley Dunn & Wilson Ltd., one of the UK’s leading heritage scanning and digitisation companies, and pre and post digitization prepping and checking was carried out by the team at Special Collections, including the creation of relevant metadata in accordance with Dublin Core standards, and the upload of nine volumes of the diaries (along with transcriptions of their contents) using  the digital collection management system ContentDM. These volumes are publically available on our Digital Special Collections & Archives webpages. 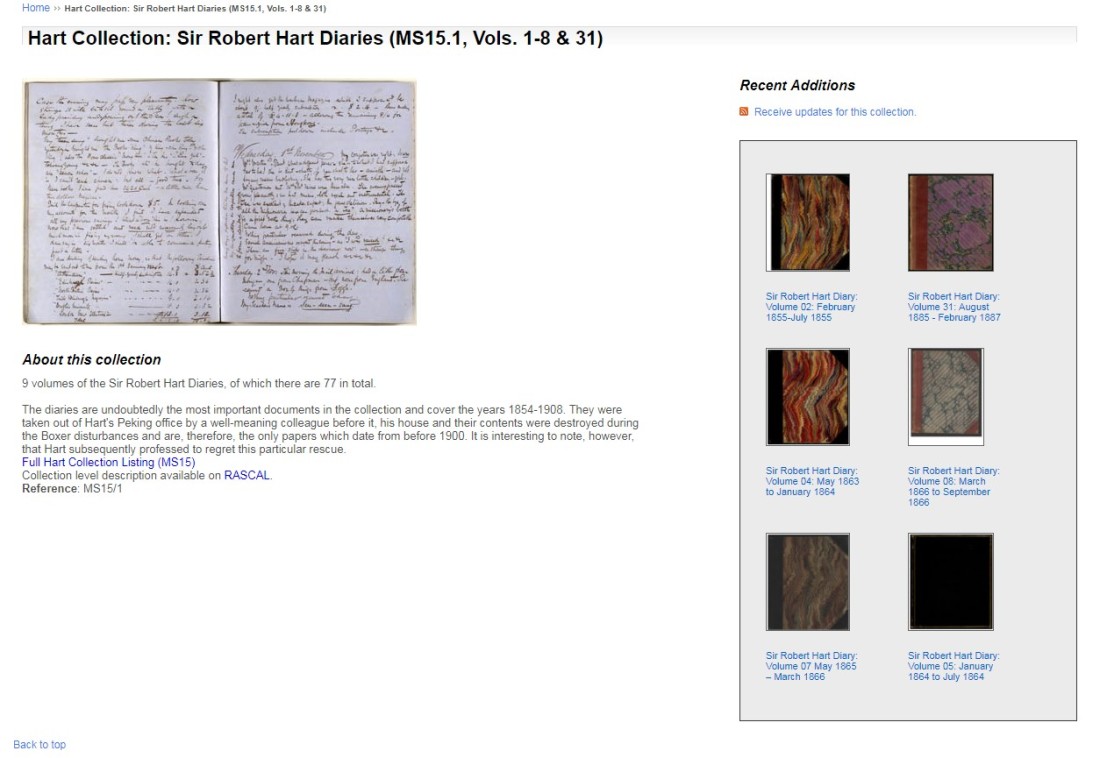 The first 4 volumes of Hart’s diaries were edited by Katherine F. Bruner, John K. Fairbank, and Richard J. Smith, and published by Harvard University as Entering China’s Service: Robert Hart’s journals, 1854-1863 (1986) and the same editorial team edited the next four volumes  as Robert Hart and China’s Early Modernization: His Journals, 1863-1866 (1991). These two volumes, with further editorial work undertaken by the Special Collections team and Dr Emma Reisz in 2011, are the source of the transcriptions for Volumes 1-8 currently available in our Digital Collections. Transcription of the remaining volume publicly available – Volume 31 – was undertaken by Dr Jennifer Regan in 2007, and supported by a British Academy small grant award.

Work on a new transcription project, a collaboration between the team at Special Collections, led by Deirdre Wildy, and HAPP academics Dr Emma Reisz and Dr Aglaia De Angeli, has been ongoing for a number of years. The long term aim of the project is the transcription and publication of all 77 volumes of Hart’s diaries, thus opening up this invaluable resource both to interested researchers and the wider public. The enormity of the task cannot, perhaps, be overstated, but steady progress is being made.

An overview of the transcription process is represented schematically below:

As can be seen, each volume of the Hart diaries undergoes at least two read-throughs in Special Collections. The first of these is intended as an initial introduction to the content of the diary, and it is expected that there will be (perhaps frequent) gaps or queries in the transcription produced. Limited time is spent at this stage on preliminary research into queries (e.g. personal or place names) using identified key resources. 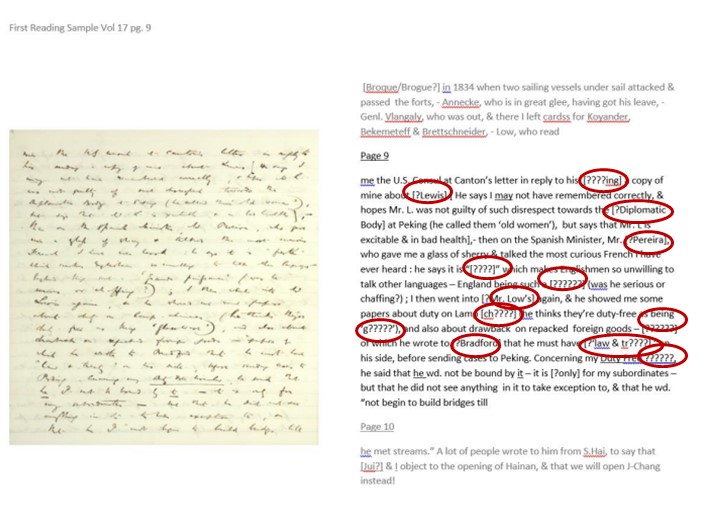 The second read through of the diaries is a two-fold process and involves a more detailed reading of the diary and more extensive research.  The transcription produced in the first read through is thoroughly checked and revised, with the aim of resolving as many as possible of the outstanding queries and ensuring the coherence of the transcription.

A third read through of the diary is occasionally possible, if staffing resources allow, and this is largely comprised of further detailed research into outstanding queries.

Once the second (or third) read through of the diaries are complete, a list of outstanding queries is drawn up for each volume and this, along with the relevant transcription, is passed on to Drs Reisz and De Angeli who bring their linguistic and subject expertise to bear in the editing of the raw transcriptions.

Whilst the sheer volume of material to be transcribed – 16,000 plus pages – is suitably daunting, and a full comprehension of the diaries requires specialist subject and linguistic knowledge, the biggest challenge by far faced in the project is, perhaps, a rather prosaic one. Hart’s handwriting, in the later volumes particularly, is atrocious.  As LeFevour puts it,

“Hart’s handwriting presents a problem. It is easily read through the first 12 volumes, up to 1869. Volumes 13 through 35, 1870 through 1889, can be read with difficulty, though a few passages defy the most patient study. From about 1885 the hand changes and becomes much more difficult to read. Acquaintance with the earlier hand helps the reader achieve partial comprehension of the later volumes, but full comprehension will require time and skill”[iv]

LeFevour’s assessment of the palaeographic challenges poses by Hart’s hand is, in fact, almost cheerful when compared with the comments of the editors of the first 8 volumes of Hart’s diaries: “[B]y this time [1868] the journals were already becoming cryptic and often impenetrable through the hasty scrawls of his deteriorating handwriting”.[v]

The Good, The Bad, and the Ugly. Hart’s handwriting over time. Snippets from Vols. 1, 35 and 77 of the diaries.

Whilst Hart’s orthographic and palaeographic idiosyncrasies are challenging, and may well, in the very later volumes, prove insurmountable in certain sections, the identification and development of a number of resources by the team in Special Collections have proved immensely useful in the transcription work undertaken to date. Amongst these resources are published materials, such as John King Fairbank, Katherine Frost Bruner and Elizabeth MacLeod Matheson, eds. The IG in Peking: letters of Robert Hart, Chinese Maritime Customs, 1868-1907 or Zhao Changtian; trans. Yang Shuhui and Yang Tunqin, An Irishman in China: Robert Hart, Inspector General of the Chinese Imperial Maritime Customs and online databases, such as the University of Bristol’s  Database of Chinese Maritime Customs Staff . As the project has progressed, staff and student assistants in Special Collections have also created some bespoke in-house resources for the project, including lists of place and personal names (it is proper nouns such as these which often prove most challenging to decipher when transcribing) and a transcription project handbook.

Extracts from Hart’s Diaries formed the basis of a five-part BBC Radio Four documentary last year, “Our Man in China: The Diaries”, presented by Edward Stourton. The transcription project forms a strand of the larger Sir Robert Hart Project at Queen’s and the project blog is regularly updated with news, events and developments.

View all posts by qubpublichistory